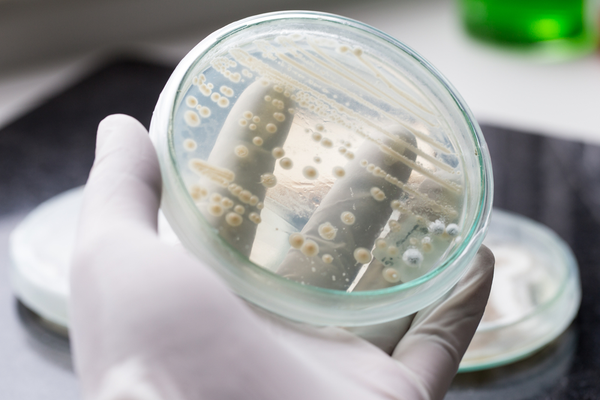 Yeast and fungal infections are no fun, but if you have an overgrowth of the fungus Candida in your body, a condition known as candidiasis, you may experience these and other symptoms more often than you’d like.

While a small amount of Candida in the body assists with digestion and the absorption of nutrients, some factors can cause Candida to grow out of control, including:
• Antibiotics
• A diet high in refined carbs and sugar
• Heavy alcohol use
• Chronic stress
• Diabetes
• Weakened immunity

Getting Candida under control is essential for good health. In addition to causing yeast and fungal infections, an overgrowth of this fungus can cause health issues like urinary tract and sinus infections, digestive woes, skin problems, and joint pain.

One natural and effective way to treat candidiasis is through your diet. By cutting out refined sugars and carbs and eating foods like garlic, coconut oil, and kombucha, you can starve the Candida while promoting the growth of healthy bacteria in the body.

However, rapidly killing off the Candida in your body can cause a number of side effects. When Candida dies en masse, the resulting metabolic reactions produce over 70 different toxins that are released into the body. These toxins can cause a range of symptoms, including: 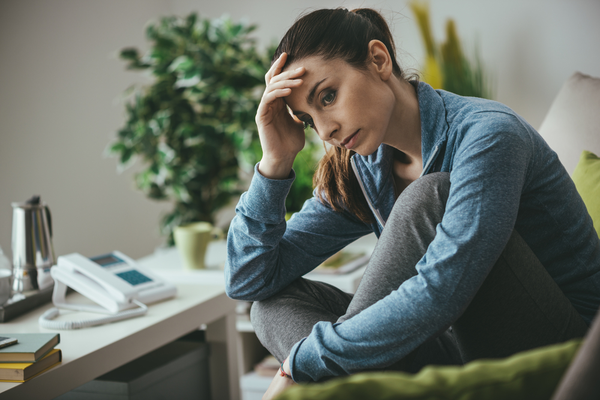 It can take anywhere from a few days to a couple of weeks for these toxins to clear the body and the symptoms to disappear.

While Candida die-off can make you feel even worse than the Candida overgrowth made you feel, keep in mind that once your body is free of Candida and its related die-off toxins, you’ll regain your energy, vitality, and good health. In the meantime, here are some things you can do to speed up the die-off and reduce discomfort during the process.

Stress can slow the die-off of Candida, and it can make symptoms feel worse. Reduce daily stressors as much as possible, and use deep-breathing meditation exercises to reduce stress on the spot. 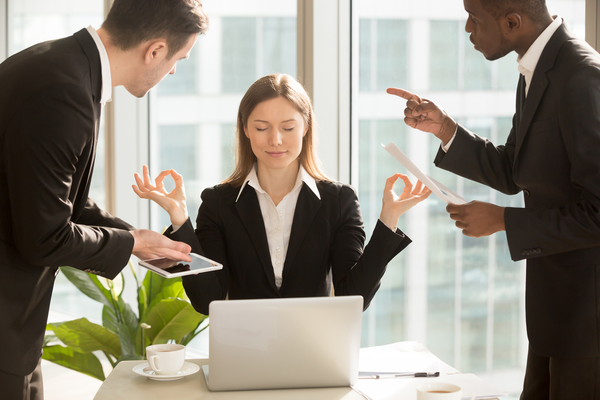 Consider a daily meditation practice, which not only reduces stress but also improves the way your body responds to stress in the future. 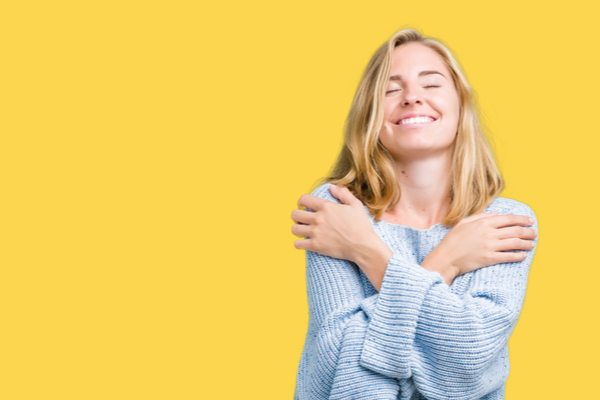 A few essential self-care practices can improve the way you feel during a Candida die-off. First, get plenty of sleep. During sleep, your body repairs itself, and sleep is crucial for optimal immunity.

Secondly, drink lots of water to help flush out toxins and reduce the risk of UTI and other infections.

Finally, engage in a half-hour of exercise each day to promote relaxation, circulation, and optimal lymphatic function.

An extra nutritional boost during the Candida die-off can speed things up as well as improve how you feel. 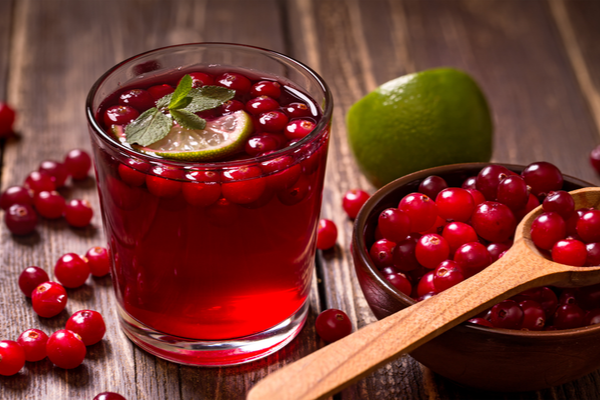 Some of the best foods to add to your diet during this time include apple cider vinegar, fermented foods, unsweetened cranberry juice, cultured dairy products, green vegetables, and spices like cinnamon and turmeric.

If, after taking Natural Candida Formula, your symptoms linger, see your doctor. Candida can be stubborn, and in severe cases, antifungal medications may be needed to restore normal Candida levels and end the symptoms of overgrowth. 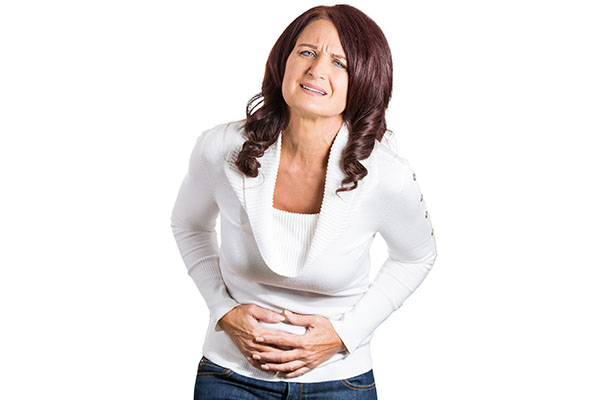 Urinary tract infections, or UTIs, are common in women, especially as we age. Unfortunately, UTIs are commonly over-diagnosed and over-treated with antibiotics, which can lead to antibiotic-resistant organisms. 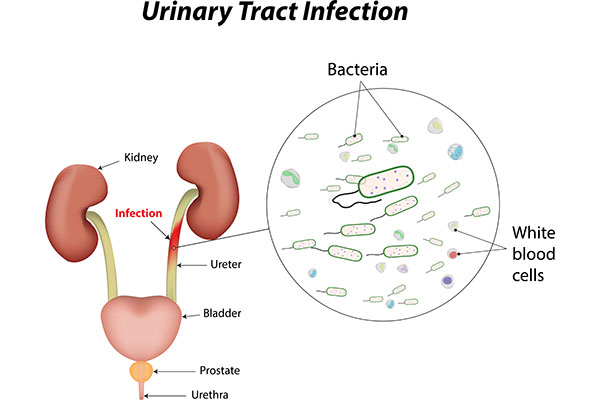 Urinary tract infections have a number of causes. A UTI may result when urine pools in the bladder due to an obstructed urinary flow, and the pooled urine grows bacteria. It can also occur when harmful bacteria cling to the urethra and make their way to the bladder. Other causes include sexual activity and a lack of estrogen in the lining of the vagina, which helps protect against UTIs.

Symptoms of a UTI include frequent urination, an urgency to urinate, and a burning sensation that accompanies urination. In elderly women, confusion is a common symptom of a UTI, and it’s often the only symptom. Left untreated, a UTI can lead to a kidney infection, which can be very dangerous, even life-threatening.

How to Prevent UTIs

Prevention is best when it comes to urinary tract infections, especially for older women and those who tend to get them often. Here are the best ways to prevent a UTI.

Stay well-hydrated.
Adequate hydration helps you produce plenty of urine to dilute and flush bad bacteria from the bladder and urethra. Avoid sugary drinks and stick to water for most of your fluid intake. 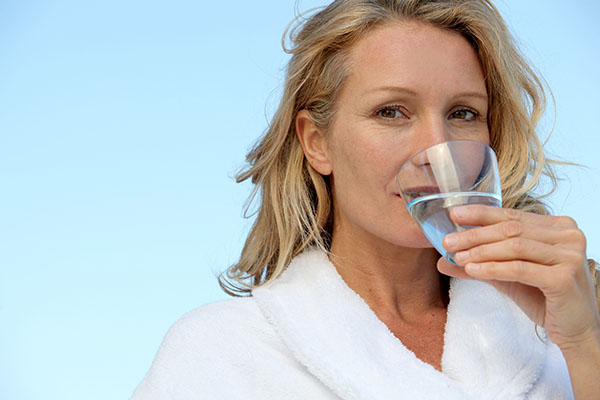 Take vitamin C.
Vitamin C helps make your urine more acidic, which may prevent the growth of bad bacteria. Get vitamin C from citrus fruits, berries, and leafy greens, or take a 500-to-1,000 milligram supplement each day.

Eat (or drink) cranberries.
Perhaps one of the most well-known anti-UTI measures is consuming cranberries, which prevent bacteria from adhering to the lining of the urinary tract. Eat dried cranberries, add them to salads or rice, or drink a little unsweetened cranberry juice each day.

Wipe from front to back.
Bacteria hang out around the anus and wiping from back to front can introduce them to your vagina, where they can migrate to the urinary tract.

Urinate after sex.
During sex, bacteria are introduced into the vagina. Urinating afterwards helps to flush it out.

Avoid feminine deodorant products.
The best way to stay fresh is to shower often with mild soap and water. Products like douches, deodorant sprays, and powders can cause a UTI and other problems. 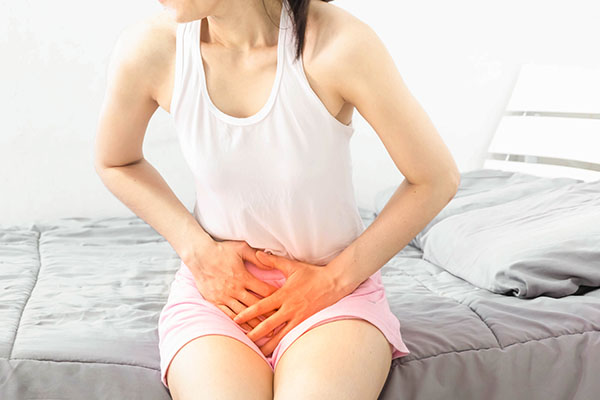 Apply estrogen vaginal cream.
If you’ve gone through menopause, you have less estrogen in your body, which can cause vaginal dryness and promote infection in the urinary tract. Estrogen creams help balance your pH so that good bacteria will flourish.

Take a probiotic. Probiotics are live “good” bacteria in your body that are involved in numerous functions to keep you healthy. According to Harvard University Medical School, taking a daily probiotic may help prevent UTIs by preventing bad bacteria from growing in the vagina. Stonehenge Health’s Dynamic Biotics contains all nine of the most important bacteria strains recommended for women.

If you get a UTI despite preventive measures, treating it early on is the best way to prevent severe symptoms and complications. If you have symptoms of a UTI, pay a visit to your doctor and consider starting a daily probiotic routine. 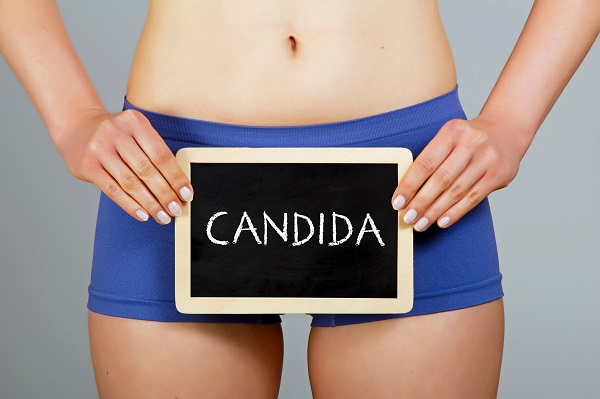 Candidiasis is a fungal infection that can affect the mouth, intestinal tract, skin, genitals, and other mucous membranes. Caused by an overgrowth of Candida, a fungus, candidiasis (more commonly known as a yeast infection) isn’t generally serious. However, if you have weakened immunity, it can lead to invasive candidiasis, a serious condition that may affect the blood, heart, or brain. END_OF_DOCUMENT_TOKEN_TO_BE_REPLACED 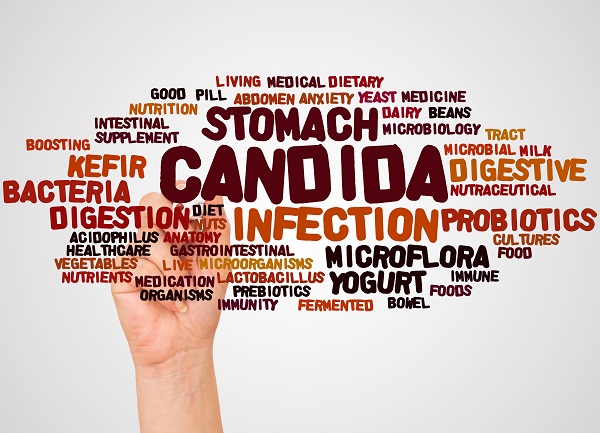 Candida is a genus of yeast found in small amounts on our skin and in the mouth and intestines. An overgrowth of Candida can lead to oral thrush, recurring yeast infections, digestion woes, and fungal infections on the skin and nails, including athlete’s foot and ringworm.

END_OF_DOCUMENT_TOKEN_TO_BE_REPLACED 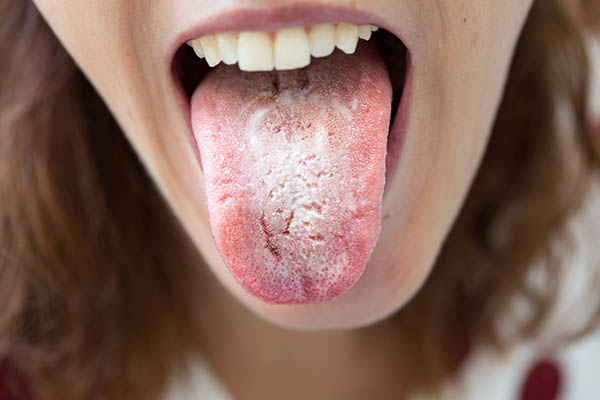 The human body is home to many types of fungi, including Candida, which is a genus of yeast that’s commonly found in very small amounts on the skin and in the intestines and mouth. Normally, Candida isn’t a problem, but when it begins to grow, it can cause one of the most common fungal infections in humans, known as candidiasis. 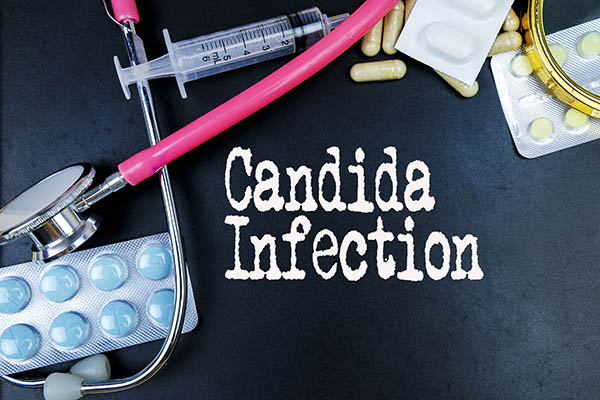 Under normal circumstances, the healthy bacteria that reside in the body keep levels of Candida under control. But if healthy bacteria levels are low or you have a compromised immune system, Candida growth can get out of control.

Some of the causes of Candida overgrowth include:
•Antibiotics.
•Birth control pills.
•A diet high in refined carbs and sugar.
•Heavy alcohol consumption.
•A weakened immune system.
•Diabetes.
•Chronic stress.

Reducing the amount of Candida in the body is essential for treating candidiasis.

Candidiasis can produce a range of symptoms. Not everyone will experience all of the symptoms, and the symptoms can range from mild to severe. The symptoms of a Candida overgrowth include:

Oral thrush. Oral thrush develops in the mouth or throat and is most common in newborns, older people, and people with a compromised immune system, according to the Postgraduate Medical Journal. Oral thrush involves white, bumpy patches on the gums, tongue, inner cheeks, tonsils, or throat. These can be painful, and they may bleed when scraped. The tongue and mouth may be red and sore. In severe cases, oral thrush can spread to the esophagus and make swallowing difficult or painful.

Recurring yeast infections. While both men and women can get yeast infections, they’re more common in women. That’s because Candida is found in the vaginal tracts of most women, and an overgrowth can cause candidiasis of the vagina. Symptoms of vaginal candidiasis include swelling, itching, redness, discharge that’s thick and white, and pain during intercourse. 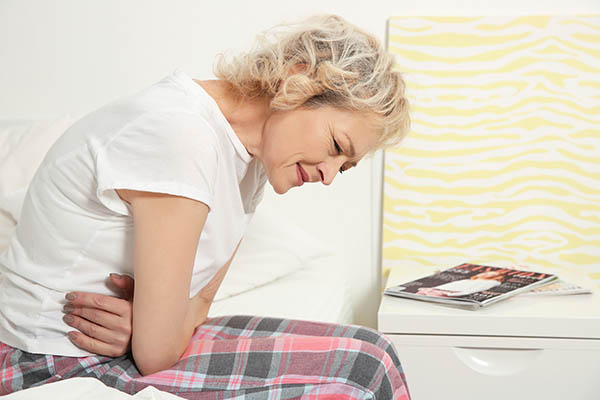 Digestive problems. Digestive health requires a healthy balance between the good and bad bacteria in your gut. The good bacteria promote healthy digestion, but when they’re overpowered by the bad bacteria–including Candida–you may experience constipation, diarrhea, gas, cramps, bloating, and nausea. According to an article published in the journal Current Opinion in Microbiology, studies show that Candida overgrowth is associated with ulcerative colitis, Crohn’s disease, and other gastrointestinal diseases. 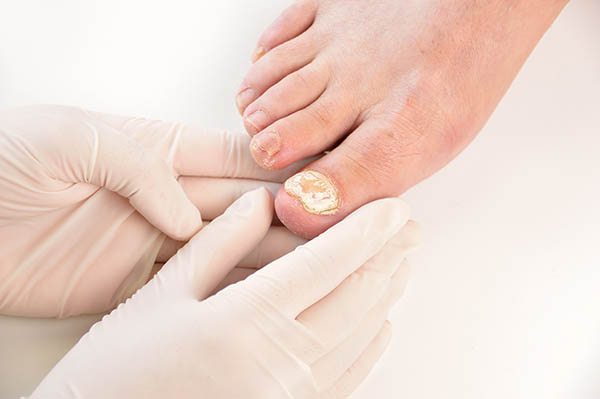 Skin and nail fungal infections. The good bacteria on your skin help keep Candida from getting out of control, but some products–especially antibacterial varieties–can lead to an overgrowth of Candida and cause itching and a rash. It can also lead to ringworm, athlete’s foot, and toenail fungus. 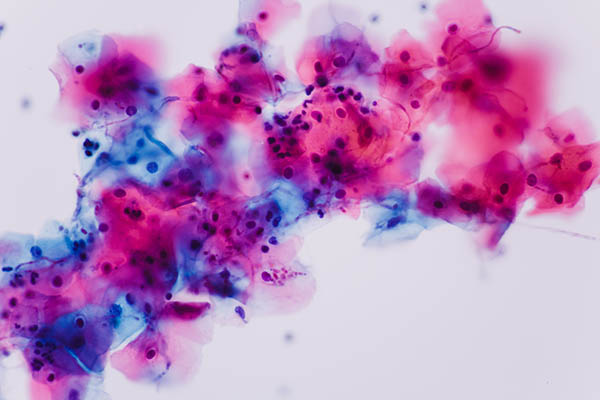 Ideally, Candida overgrowth should be treated with diet, probiotics, and digestive enzymes that re-balance the bacteria in the gut, mouth, and skin. If diet and supplements don’t do the trick, you may need anti-fungal drugs, which can effectively restore an ideal balance of bacteria, but not without side effects. Anti-fungal drugs can cause gastrointestinal difficulties, headache, dizziness, and hair loss. Rare, but severe, side effects may include an irregular heartbeat and severe dizziness or fainting.

To treat candidiasis naturally, the first order of business is to avoid refined carbs, sugars, and dairy products that are high in lactose, all of which encourage the growth of Candida. Secondly, eat foods that have been shown to fight candidiasis, including garlic, coconut oil, curcumin, pomegranates, and kombucha. Thirdly, take a supplement containing probiotics and enzymes to promote healthy gut bacteria.

Stonehenge Health’s Natural Candida Formula contains a number of ingredients that help promote a proper balance of gut bacteria, including anti-fungal herbs, probiotics, and protease and cellulase, which are enzymes that destroy the cell walls and nuclei of Candida yeast. Along with a healthy diet, our Natural Candida Formula can treat a Candida overgrowth and restore your good health. 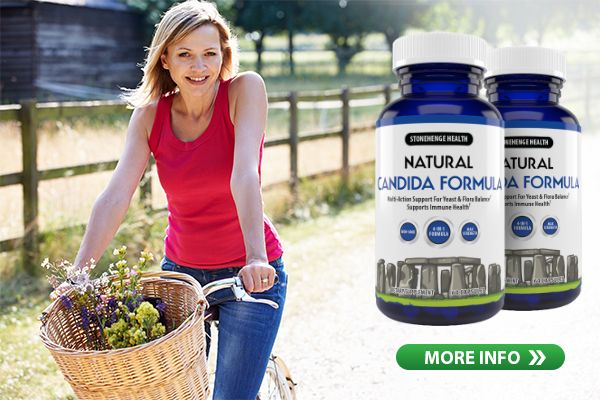